Google will start blocking annoying and intrusive ads on its Chrome browser.

The types of ads that will be blocked on the world’s most popular browser include full page pop-up ads and some auto-playing video ads.

These kinds of adverts can be used by businesses to broadcast messages and drive website conversions, but they can also put some customers off using your website and your brand.

For businesses that respond to the changes in the right way and get more innovative with their digital marketing, these changes could be a blessing in disguise.

The Coalition for Better Ads

The Coalition for Better Ads (CBA) is the arbiter of which ads are blocked and which are passed through.

It is an industry group made up of businesses including Google and Facebook. The CBA surveyed more than 40,000 internet users in North America and Europe to evaluate how intrusive certain ad experiences were.

Some digital advertisers were concerned that the Chrome ad-blocker would block all adverts, but the latest proposals have largely been welcomed.

What kinds of ads will be banned

Chrome’s ad blocker will operate according to a set of guidelines drawn up by the CBA. These guidelines take into account the worst offending ads from internet users’ survey.

Adblock Plus tested the Chrome blocker and found that it stopped the following ads: 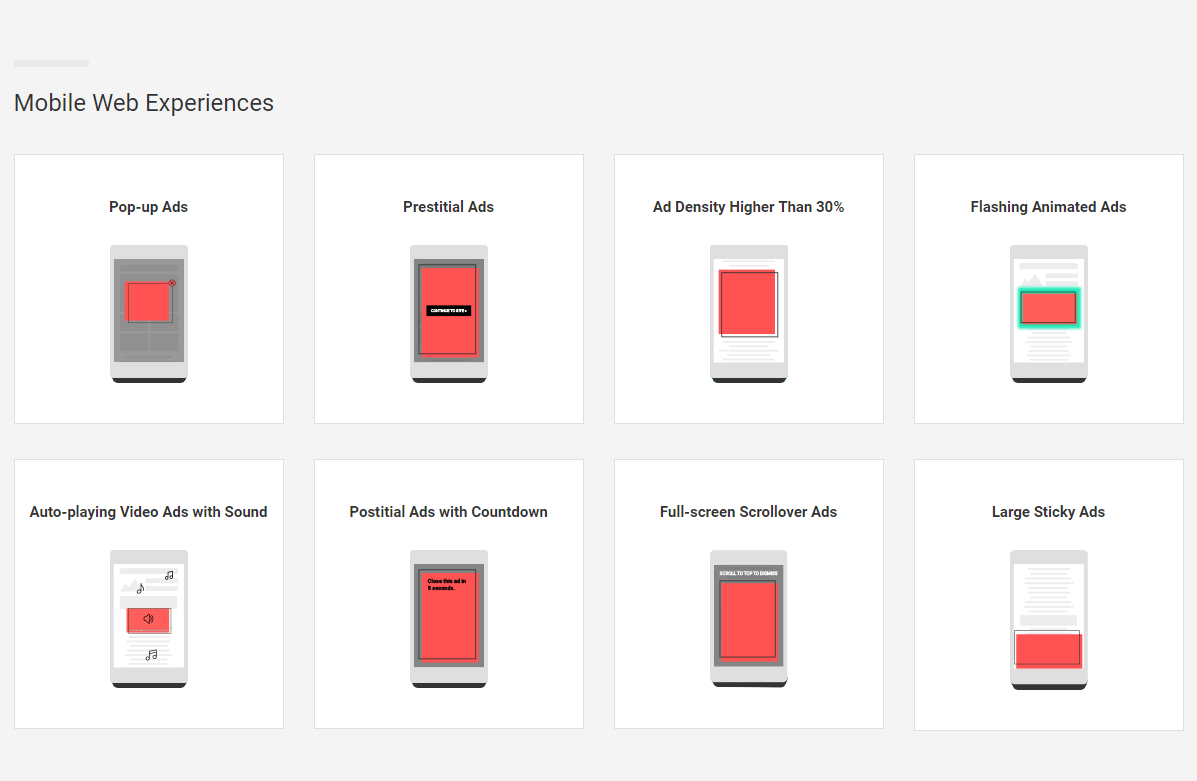 But there are some important caveats to Google’s blocking. The Wall Street Journal, for example, notes that the CBA included an important exemption to the rule banning video ads that autoplay with the sound that would allow Facebook to continue running the format.

Video pre-roll ads of the kind played on YouTube, which are almost universally disliked , are not included in the CBA proposals at all.

How do you check your own ads?

You have time to check your own ads and address the changes before the changes start taking effect.

You do this by using the Ad Experience Report in Google’s Search Console. This will tell you if any ads on your site violate the Better Ads Standards.

If you make any changes to your website ads then you can request a review of your site after you have fixed the issues.

When they first announced that they would begin blocking ads on Chrome, Google said:

“Over the years we’ve increasingly heard from users that while some types of advertising are fine, others can seem overwhelmingly frustrating or intrusive. Due to these poor ad experiences, the usage of extensions that block ads across the web continues to rise, up about 30% from just last year.”

Their intention is to block the worst offending ads to prevent people from downloading extensions like Adblock Plus.

Analysing Google Chrome’s blocker, Adblock plus found that it would only block about 16.4% of ads. By comparison, Adblock Plus blocks 92.7% of ads.

Research firm eMarketer estimates that 28% of desktop internet users in the US use adblockers along with 11.8% of smartphone users.

Chrome’s ad blocker should slow down the uptake of more severe ad blockers like Ad Block Plus. This will benefit businesses that use less intrusive ads on their website.

The Coalition for Better Ads won’t penalise their own money makers. These kinds of ads are also very good at reaching exactly the kinds of customers that your business wants to reach.

People are less likely to be upset with your adverts if you offer them something.

If you have a popup advert on your website that offers people a free consultancy session or a free white paper guide, that’s better than pop-up that just tries to sell.

Pop-ups can drive website conversions – getting consumers to do what you want them to do. Be careful though.

But make sure you don’t put short-term conversion targets over your company’s identity. People don’t really like pop-ups, even ‘non-intrusive’ pop-ups. And it could hurt your brand.