Our Lewis wins Player of The Year….again!

Lewis Montrose, the Stockport County player sponsored by The Artlab for the last two seasons has won Player of The Year for the second season running! 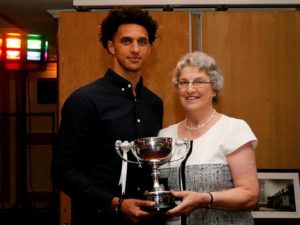 The combative midfielder also scored his first goal for County in April against Telford and has been one of the first on the team sheet all season.

The award was presented on Saturday night at the end of season awards dinner. Stockport County are looking to keep hold of the talented and influential midfielder as they look forward to next season, although the inevitable transfer speculation has abounded in light of his excellent performances. But Lewis recently signed a two year extension to his current deal, hopefully keeping him at Edgeley Park until 2019. Although ending the 2016/17 season strongly, it was felt as a disappointment by the fans as the team only missed out on a place in the play offs by 1 goal.